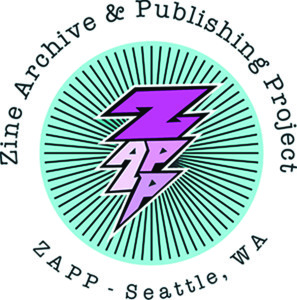 The Zine Archive and Publishing Project (ZAPP) was a volunteer-driven living archive of over 30,000 self-published materials, a DIY resource and educational center committed to supporting underheard voices from around the world, maintaining and validating publications outside the literary mainstream.

Founded in 1996 by Gary Greaves, Annie Fanning and Chuck Swaim as a program of the Richard Hugo House, in 2013 ZAPP became an independent organization operating under the fiscal sponsorship of Shunpike. At this time ZAPP moved forward in solidifying its organizational structure, collecting zines, programming, and looking for a permanent, independent home for the zines.

In 2016, Richard Hugo House chose to give maintenance and ownership of the archive over to Seattle Public Library, who will assess and daylight the collection over the course of the following year. ZAPP as an organization was not directly involved in this decision. ZAPP as a non profit organization closed down April 1st, 2017, donating all funds raised to Short Run Festival, IPRC, and Hollow Earth Radio. Many thanks to those who volunteered time, energy, zines, or money over the years.

Please direct any questions about the status of the collection to Richard Hugo House or Seattle Public Library. 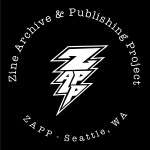